by admin
in Uncategorized
Comments

Typically most of the NGO’s have 2 clear objectives for any rural engagement program :

Traditionally ICT program’s and initiative’s to connect with the rural population in India have typically faced the following challenge:

A single number based voice solution built on a cloud telephony platform for broadcasting pre-recorded automated voice calls, people who are unable to receive the call, can call back on the same number which functions as a missed call number and automatically generates an outbound voice call in the specific dialect with the voice communication for the day.

The system architect can be designed such that an audio library is created and the calling/called person has the option of listening to previous audio messages.

The uniqueness lies in having a single number for communication which functions both as a outgoing number and a missed call number resulting in much higher contacts, zero cost to the target group and the power of referrals which helps in creating awareness about the single number amongst the target group.

Every person who calls up the number & is not in the existing database has the option to choose the Block/District for which they would like to register themselves and subsequently will be part of the scheduled information dissemination program, the number addition to the specific Block/District is automatic and requires no manual intervention.

To reinforce the number and to help make the number viral, people are encouraged to share the number with their acquaintances and each call is followed-up by an automatic SMS communication.

The target group need to only have any basic feature phone which can receive and make calls.

The program can help in engaging, partnering and winning the trust by building a one to one connect in the targeted geography by providing reliable, timely and actionable information overcoming the literacy & technology barriers.

Define the call flow on the user-friendly web-based panel through simple drag and drop. You can customize your IVR flow in real-time.

Let your customers decide who they would like to speak to without any manual intervention. Receive calls on unlimited extensions anywhere in the world at any time.

Define the Call routing based on the skill level, event, department, and time-based or any other business need. Call routing can help priorities the calls and route to the right person.

Our powerful dashboard helps you understand what is happening to your business calls in real time. You can check and download all the current and previous calls statistics.

You can easily Check (and download) all your incoming and outgoing conversations any time. And store these for future use and you may delete these at any time.

Integrate our API with your favorite CRM tool. An integrated view of your clients, sales, and marketing efforts. Engage with your customers right from lead to after sales support.

Our Sticky agent feature allows the caller to be automatically connected to the same person who knows the customer recent history. It will help to improve customer experience.

Never miss a business lead, get end to end call tracking through SMS and email notifications. Get detailed call reports via email. 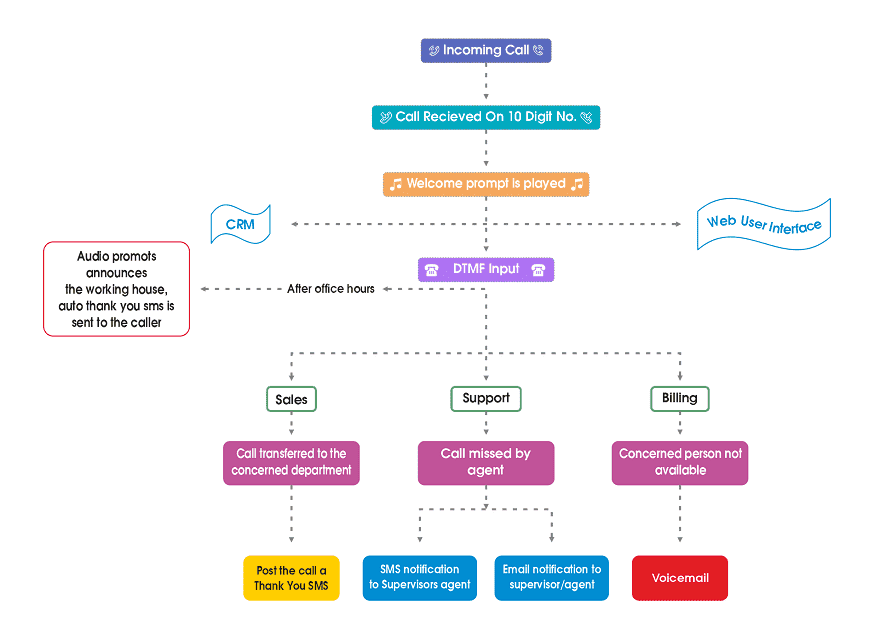